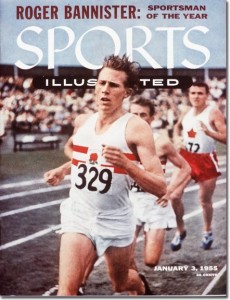 On May 6, 1954 Roger Bannister ran a mile in 3:59.4 minutes. That’s no big deal if you consider the fact that his time has been broken hundreds of times in the 60 years since then. But it was a big deal then because he accomplished what most considered to be impossible. He ran a mile in less than four minutes. No human being had accomplished that feat until then.

In my work as a consultant I am constantly provoking people and businesses to consider new and different ways to do what they do every day. It’s surprising how often their attitude is synonymous with those who claimed the mile could not be run in less than four minutes. They will give you all the reasons why what they do can’t be done any differently.

Every great achievement is preceded by a performance of the Choir of the Content. Their song has many choruses: It will never work! It can’t be done! We’ve never done it that way! We tried that once and it failed! That’s not what built our company!

I’ll always remember something Denis Waitley said, “We naturally move toward our most dominant thought.” So if you think the four minute mile is impossible it is impossible. Then there are the pioneers, the contrarians, like Roger Bannister who think in terms of what is possible. They move toward the possible thought. Your thoughts and words become self-fulfilling prophesies. Or in the words of Henry Ford, “Think you can, think you can’t, you’re right either way.”

In an Associated Press article by Stephen Wilson, Bannister was quoted as saying he thinks the next barrier in sports to be broken is the two hour mark in the marathon. The world record is 2:03.23. What’s the reason for Bannister’s optimism? Because, he says, “It involves a two percent improvement.” I like the way he thinks. Only two percent! Granted, all the conditions have to be right but when you consider it’s only a two percent improvement it doesn’t sound impossible does it?

If all of us would approach improvement in the same way Roger Bannister does, the impossible in our minds would become more possible.

Roger Bannister turned to medicine after his running career was over. He considers his work as a neurologist his proudest achievement: “I wouldn’t claim to make any great discoveries, but at any rate I satisfactorily inched forward in our knowledge of our particular aspect of medicine.”

Let that sink in for a minute. He approached medicine with the same attitude as he did running. He inched forward ­— not 6 seconds — but a mere .6 of a second. He ran the mile in 3:59.4 minutes and accomplished what most considered to be impossible.

World records are set by people who dare to think they can run .6 of a second faster. Breakthroughs in medicine are achieved by people who are willing to measure progress in inches.

But no records or breakthroughs are achieved by people who claim that what’s possible is impossible. Who’s to say what is possible? So, the next time you choose to play the devil’s advocate, or to be the naysayer who is content with protecting the status quo, think about Roger Bannister. He’s the man who achieved the impossible by .6 of a second.