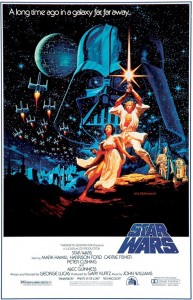 “A long time ago in a galaxy far, far away…” That now iconic opening scroll was inspired by Flash Gordon and Buck Rogers, movie serials originally produced during the 1930s and 40s. That was before my time but I watched them when they were rerun on television. So did George Lucas — and watching those serials provided much of the inspiration for creating Star Wars. “Star Wars is built on top of many things that came before,” said Lucas. “This film is a compilation of all those dreams, using them as a history to create a new dream.”

Space travel was science fiction until Soviet Cosmonaut Yuri Gagarin became the first human being to orbit the Earth’s atmosphere in 1961. Eight years later Neil Armstrong set foot on the moon. But 104 years earlier Jules Verne, the father of science fiction, wrote Earth to the Moon and a sequel, Around the Moon, in 1870. These books were pure fiction but much of what he wrote about proved to be eerily prophetic. Verne’s fictional spacecraft was launched from central Florida near Cape Canaveral and landed within a few miles of the spot where Apollo 11 splashed down in 1969.

“Whatever one man is capable of imagining,” observed Verne, “other men will prove themselves capable of realizing.” The seeds for the 1969 lunar landing were planted by Jules Verne in 1865. The seeds were planted for Star Wars when Philip Nowlan created Buck Rogers in 1928 and Alex Raymond created Flash Gordon in 1934.

Instead of planting most businesses are just planning. And their idea of planning is usually viewing the future merely as an extension of the present. As strategic futurist, Steve Tighe observes, “This short-term, blinkered approach to time and space is leaving businesses vulnerable to the vast amount of change that is building just outside their scope of vision. When it does arrive, this change inevitably catches them by surprise, disrupting existing plans, and forcing a company-wide panic mode.”

I met Steve when we both spoke at a conference in Australia in 2008. His words proved to be prophetic. When I left the U.S. for the conference the economy was booming. When I returned two weeks later it had collapsed. Companies with entire strategic planning departments were indeed caught by surprise and forced into panic mode.

I abandoned strategic planning years ago and developed Strategic Pioneering where I ask clients to look a generation (30 years) ahead. Think of it as writing the script for a movie entitled (Your Company Name): The Next Generation. Pioneering requires you to boldly go where no man has gone before. But before you make that trip take a look behind you. To grasp how radically things change in three decades I first ask clients to look back a generation and describe what the world looked like then. Keep in mind, Star Wars was taking shape in the young mind of George Lucas a generation before the movie became a reality.

Pioneering requires you to let your mind wander far from the scope of your current vision. To do that effectively, go to the future in your mind’s eye and look back. Your movie opens with, “A long time ago…” You can’t worry that what you might envision seems far beyond your ability to accomplish. When Jules Verne imagined going to the moon that seemed impossible. A generation later the Wright brothers built an airplane that could fly. A generation later Frank Whittle developed the jet engine. A generation later Neil Armstrong took his famous giant leap for mankind.

That giant leap was actually first taken in the mind of Jules Verne and recorded in Earth to the Moon more than three generations before it happened. That’s Strategic Pioneering. Today’s science fiction is tomorrow’s science. You can write your future history today. “Don’t follow where the path may lead,” wrote Ralph Waldo Emerson. “Go instead where there is no path and leave a trail.” Don’t discount the power of your imagination. Boldly go where no man has gone before and others will follow. May the Force be with you.