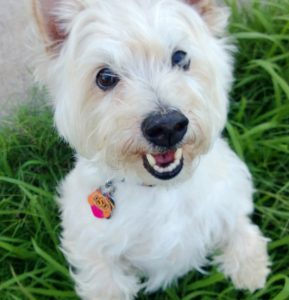 After picking up the mail Charlie Mitchell and I were on our way out of the Post Office when a man pointed to Charlie and asked, “Is that a service dog?” Before I could answer he added, “If he’s not you can’t bring him in here. I might get sued.”

“Are you the postmaster here?” I asked. “No, I’m the station manager,” he replied.

I stuck out my hand and said, “My name is Jim Whitt.” He reluctantly took my hand with a limp grip but didn’t offer his name in return. “I’ve done a lot of work for the postal service,” I continued. This impressed him not in the least. He mumbled something along the lines of, “Really?” He paid little attention to me but kept a nervous eye on Charlie. He must have been a former letter carrier. Charlie just smiled at him.

I was doing my best to form a bond with the station manager but he didn’t want to participate. I tried again. “How long have you been with the Postal Service?” I asked. “Fifteen years,” was his answer. It had been more than 15 years since I conducted customer service workshops for the Postal Service so he couldn’t have attended any of my sessions. That’s a shame because he obviously didn’t know much about the subject. Since he can retire after 30 years my guess he’s trying to figure out how to survive the next 15 years instead of figuring out how to better serve his customers.

The Post Office, unlike other government agencies, receives no tax revenue. Like private enterprise they have to make money the old-fashioned way — they have to earn it. And that’s the problem — they aren’t earning it. There are several reasons why the Postal Service is going broke but the station manager’s attitude is one that could be and should be corrected immediately. People don’t like to do business with people who don’t know how to get along with people — or dogs.

Charlie Mitchell may not be a certified service dog but he could teach the station manager a thing or two about customer service. Charlie is a 17-pound West Highland Terrier. Well he’s mostly a Westie. Charlie is a rescue dog. Everywhere Charlie goes he makes friends. Charlie makes people feel better. When my mother lived at the Methodist Manor I used to take Charlie to visit. He’d trot down the hallways smiling and stop to greet residents and staff alike. People’s faces would light up when they saw Charlie.

Everybody likes Charlie. Well, nearly everybody. The station manager didn’t seem to like him. But I think he doesn’t like dogs or people.

The station manager could have turned his encounter with Charlie and me into a positive customer service experience. He could have given Charlie a pat on the head and told me he was an exceptionally handsome and intelligent dog (which he is). He could have introduced himself and thanked me for my business. He could have taken the opportunity to get acquainted and learn more about my business and how he could better serve me. He could have done all of that and then politely let me know his policy about dogs in the Post Office. I would have graciously thanked him and walked away impressed. But I don’t think he even thought of me as a customer. I was a compliance issue that needed to be rectified. And I left the Post Office feeling rectified.

If the station manager treats employees with the same lack of regard he showed Charlie and me you can imagine how happy they are to show up and serve customers every day. Excellent customer service and happy employees go hand in hand. You don’t get one without the other. Take the station manager’s attitude and multiply it times however many people work there and I imagine compliance trumps customer service every time.

This article was originally published on February 26, 2013

Jim Whitt’s purpose in life is to help people reach their full potential. After graduating from Oklahoma State University Jim spent a dozen years in sales and marketing with two Fortune 500 companies. In 1988 he launched his career as a consultant, writer and speaker. Read More