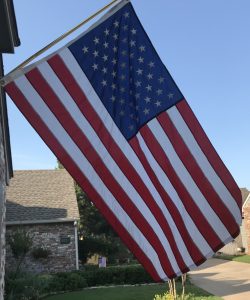 My friend John Teeter shared a story with me that is appropriate as we celebrate Independence Day:

“When I was 23 years old I worked in the parts department at Teeter Irrigation. It was a hot summer day when R.D. Floyd, one of our longtime customers, walked into the store.  This was not unusual as R.D. came in frequently to pick up parts. What was unusual was that he was carrying a tattered and torn American flag — the flag, which until a few minutes earlier, flew outside our store. R.D. was a man of few words and in typical fashion he got straight to the point. He put the flag on the counter and stated matter-of-factly, ‘I better never see the Flag look that way again.’ He then turned around and walked out. I immediately went out and put a new flag up on the pole.

“To this day, I have never looked at the flag the same.  R.D. was a man who had served this country in World War II and marched through eight countries as an infantryman.  He survived many cold nights and days digging fox holes serving our great country for freedom.  One winter day my father told R.D. that it sure was cold. ‘Young man,’ he replied, ‘you don’t know what cold is. I remember a time when for two weeks I never felt my toes!’”

It’s easy to express outrage when we see people who hate our country burning the American flag. But every day I drive past buildings that fly a Flag that is tattered and torn. That sends a mixed message: “We’re proud to fly our flag but not enough to take care of it.” That is no display of patriotism.

It’s easy to express outrage when professional athletes take a knee during the national anthem. But I see men at sporting events who fail to remove their caps during the anthem and other people who pay no attention or glibly talk and laugh. That is no display of patriotism.

A real act of patriotism is R.D. Floyd caring enough to let John Teeter know their flag needed to be replaced. That’s something all of us can do. I have sent cards and emails to businesses letting them know that their flag needs to be replaced. They usually replace them immediately. It’s not that they are deliberately disrespecting the Flag, it’s just that they have forgotten about what it represents and take it for granted.

We must constantly be reminded of what the Flag represents or else we will take it for granted. On one of his television programs in 1969, Red Skelton told this story about Mr. Lasswell, the Principal at Vincennes High School where Red attended. He addressed Red’s class after hearing them recite the Pledge of Allegiance:

“Boys and girls, I have been listening to you recite the Pledge of Allegiance all semester, and it seems that it has become monotonous to you. Or, could it be, you do not understand the meaning of each word? If I may, I would like to recite the pledge, and give you a definition for each word.

“I: me, an individual, a committee of one — pledge: dedicate all of my worldly good to give without self-pity — allegiance: my love and my devotion — to the Flag: our standard, Old Glory, a symbol of freedom, wherever she waves there is respect, because your loyalty has given her a dignity that shouts ‘freedom is everybody’s job’ — of the United: that means we have all come together — States: individual communities that have united into 48 great states, 48 individual communities with pride and dignity and purpose, all divided by imaginary boundaries, yet united to a common purpose, and that’s love for country — and to the Republic: a Republic, a sovereign state in which power is invested into the representatives chosen by the people to govern; and the government is the people and it’s from the people to the leaders, not from the leaders to the people — for which it stands; one Nation: one nation meaning so blessed by God — indivisible: incapable of being divided — with Liberty: which is freedom, the right of power for one to live his own life without fears, threats, or any sort of retaliation — and justice: the principle and qualities of dealing fairly with others — for all: for all, that means boys and girls, it’s as much your country as it is mine.”

After reciting the pledge in its entirety, Red Skelton added this postscript: “Since I was a small boy, two states have been added to our country, and two words have been added to the Pledge of Allegiance — under God. Wouldn’t it be a pity if someone said, “That is a prayer — and that would be eliminated from our schools, too?”

When we see the American Flag flying today we should think about R.D. Floyd, Red Skelton and Mr. Lasswell. They did not take the Flag for granted. They could tell you exactly what the Flag meant to them.

What does the Flag mean to you?

Jim Whitt’s purpose in life is to help people reach their full potential. After graduating from Oklahoma State University Jim spent a dozen years in sales and marketing with two Fortune 500 companies. In 1988 he launched his career as a consultant, writer and speaker. Read More