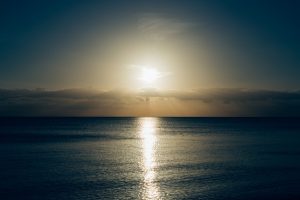 There’s a story of a man who wished for a world where people wouldn’t have to struggle. It was unfair, he believed, that for all the progress humanity had made throughout history that so much of the world’s population still struggled just to survive.

He roamed the world searching for the solution and while traveling in the Middle East encountered a beggar in the streets. He was not an ordinary beggar, however. He knew what the traveler was searching for — the perfect place. The man followed the beggar who led him through darkened streets to an enormous wall. Placing his hands on the wall the man was supernaturally transported to the other side.

There he found himself in an extraordinary world where no one worked because they didn’t have to. Every need and want was taken care of. There was no struggle. The word “struggle” didn’t even exist. He met a woman — the perfect woman — who led him to a picture-perfect valley where three artists were painting landscapes. Each painting was identical — they were all perfect.

The perfect woman explained that in this world whatever he desired was his for the asking. An avid outdoorsman, he said he’d like to catch a boatload of fish. A guide appeared to grant his wish and with every cast he reeled in a trophy catch. It was easy — so easy that the fish didn’t even fight. After filling the boat with fish he asked to go hunting. His guide led him to a ridge where several trophy bucks stood perfectly still and stared at him. This was going to be easy he thought as he sighted one in. But he couldn’t bring himself to pull the trigger. It was too easy.

Perfect can be defined as being entirely without fault or defect. It is human nature to desire perfection. In a perfect world, no one would suffer or struggle. But that is precisely the opposite of what we need or even want. In the words of Viktor Frankl, “Ever more people today have the means to live, but no meaning to live for.” Frankl, a neurologist and psychiatrist, was incarcerated in Auschwitz, the most famous of the Nazi’s concentration camps during World War II. It was in this hell-on-earth that Frankl validated his theory of Logotherapy which he chronicled in his book, Man’s Search for Meaning. “It is one of the basic tenets of Logotherapy that man’s main concern is not to gain pleasure or to avoid pain but rather to see a meaning in his life,” wrote Frankl. “That is why man is even ready to suffer, on the condition, to be sure, that his suffering has meaning.”

Hundreds of government programs have spent billions of dollars so that people won’t have to struggle. But the unintended consequences of these programs have been detrimental to those they were intended to help. There is value in struggling. I dedicated an entire chapter to the subject in my book, The Transformational Power of Purpose: Finding & Fulfilling Your Purpose in Life. Borrowing a line from John Cougar Mellencamp, its entitled It Hurts So Good.

When used as a verb perfect (emphasis on the second syllable) means to improve or refine — as in perfecting a process. For gold to have any value it must first be refined. The refinement process burns away the dross that contains all of the impurities. It takes one ton of ore to produce one-third of an ounce of pure gold. You have to undergo a refinement process for your potential to be fully realized. Struggling is what perfects you as a human being. No struggle, no improvement. No pain, no gain.

Editor’s note: The Transformational Power of Purpose is now available as an online course. Click here to learn more