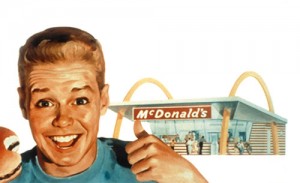 When you walk into a fast-food restaurant, how long do you expect to wait from the time you order until you get your food? Five minutes? No, five minutes seems like an eternity in a fast-food place. Think about that — fast-food. It’s part of our culture. Where did the concept for fast food begin?

Fast-food started when the McDonald brothers opened a drive-in restaurant in San Bernardino, California back in the 1930s. It had car hops and curb service. It looked like a scene from the movie American Graffiti. It took about twenty minutes from the time you ordered your food until it was delivered to your car. That was fast-food in the 1930s. The McDonald brothers had a gold mine — but they thought it could be even better.

In the 1940s they closed their drive-in. Not because it wasn’t making money, but because they wanted to make their fast food faster. They retooled the kitchen and did for the drive-in what Henry Ford did for the automobile, turning the kitchen into an assembly line process. It shortened the time it took to get your food from twenty minutes to — get ready for this — thirty seconds! Then they reopened and had an even bigger gold mine.

The McDonald brothers revolutionized the drive-in restaurant — then they sat on their gold mine. A salesman by the name of Ray Kroc supplied malt and milk-shake mixers to the McDonalds. He saw something the McDonalds didn’t — the potential of franchising their fast-food concept. He talked them into selling him the franchise rights to Chicago and started opening drive-ins under the neon glare of the golden arches. He eventually bought the brothers McDonald out and the rest is history.

What are the lessons here? It’s nearly impossible to change horses in the middle of the stream. Customers will demand that you keep doing things the same way — if they don’t know another way. If the customer doesn’t know thirty-second service is possible, they won’t ask for it. That’s why most organizations won’t change until it’s too late. The customer rewards them to keep doing the same thing, preventing them from moving on to the next wave of innovation. That’s why in the 1960s, Sears & Roebuck couldn’t imagine a backwater discount store called Wal-Mart overtaking them in the 1990s.

The second lesson is this. The McDonalds created fast-food — but failed to see its franchise potential. It took an outsider like Ray Kroc to see the potential of the McDonald’s fast-food concept. As innovative as the McDonalds were in developing the assembly line approach, they couldn’t get past their own success to realize its full potential.

Ideas have a life span. Today’s innovation can be tomorrow’s old shoe. The brilliance of today’s success can blind us to the opportunities of tomorrow.