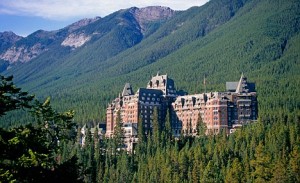 If you were going to build the largest hotel in North America, where would you build it? The logical thing to do would be to build it in one of the continent’s largest metropolitan areas. Maybe New York, Las Vegas, Los Angeles or Florida. That would make sense, wouldn’t it? Find out where the most people need overnight accommodations and build a hotel big enough to hold them.

My Canadian friend Harvey Dann hired me to speak to a group of Alberta cattle feeders years ago and suggested that my wife, Sondra and I take a couple of extra days and stay at the hotel W.C. Van Horne built. I’m glad we did because the scenery is breathtaking. But even more importantly, I learned why Van Horne chose that site to build the largest hotel in North America.

As Vice President and General Manager of the Canadian Pacific Railway Van Horne was responsible for completing the first transcontinental railroad in Canada in the 1880s. The Rocky Mountains proved to be the most difficult stretch of track to complete. But several natural hot springs were discovered in the mountains near the railroad. When Van Horne saw the springs in 1885 he announced, “These springs are worth a million dollars!”

It wasn’t just the springs that were worth a million dollars, the location had a million dollar view. “If we can’t export the scenery, we’ll have to import the tourists,” Van Horn reasoned, He already had a railroad to get the tourists there, now he just needed a place for them to stay. So the Canadian Pacific Railway got into the hotel business — and in a big way — the original structure cost $250,000. But it paid off big. The rich and famous came from around the world to bathe in the million dollar springs and see the million dollar view. Today, people still come from around the world to visit Banff. About 35% of the guests come from Japan alone.

W.C. Van Horn was what we would call a contrarian, someone who goes against the grain of conventional wisdom. It was a big gamble to build the world’s largest hotel where there wasn’t even a town. His foresight transformed the struggling Canadian Pacific Railway from a debt-ridden railroad into one of the world’s greatest enterprises. Most would consider it an impossible feat, but not Van Horn. “The biggest things are always easiest to do,” he said. “Why? Because there is no competition.”

The future belongs to contrarians. They are able to anticipate it, envision it and are bold enough to create it. Contrarians skate to where the puck will be. This comes at great risk because they are venturing into uncharted territory — like Banff. Contrarians think big. The biggest things are always the easiest to do because the conventional thinkers aren’t around. They went the way of the dinosaur because they skated to where the puck has been.