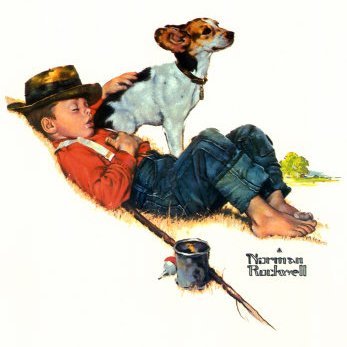 Fishing brings to mind Rockwellian visions of barefoot boys lounging lazily on a creek bank with cane poles, a can of worms and not a care in the world. Fishing in the 21st century wouldn’t fit in a Norman Rockwell frame, however. Fishing has become big business. Billions of dollars are spent on high powered boats and high tech equipment. But all that technology will not make you a great fisherman. If you learn the secret to successful fishing you will also learn how to be more successful in life.

In an issue of Dakota Country magazine, Dan Nelson writes that many fishermen are under the illusion that using the most sophisticated equipment will transform them into Jimmy Houston. Nelson puts that theory into its proper perspective: “While good equipment is important, it’s not the key to successful fishing. If Tiger Woods and I swapped clubs for a day, he’d still drive the ball 300 yards and I’d still be a hacker lost in the tall grass.”

So, what is the secret to catching fish? Nelson shares this story about walleye fishing legend Bob Propst:

“Years ago I fished the Mobridge area with Bob on a day when fronts were coming through one after another and the fish were ‘off.’ Along with two dozen other boats, we drifted and trolled a point that had been kicking out lots of fish the previous day.

“Without warning, Bobby cut off the rig he was using, tied a bare hook to his line, attached a small split shot and grabbed a lively fathead minnow. Seconds later he boated our first fish, a chunky three-pounder. A four-pounder quickly followed the first into the live well.

“We didn’t fill out that day, but Bob caught more decent-sized fish than all of the other boats in the area combined.

“‘I didn’t,’ he smiled. ‘But when what you’re doing isn’t working, it’s time to try something else.’

“That statement sums up the secret to successful fishing.”

That statement is critical to success in any endeavor. I think many of us tend to look at successful people and assume that they are more talented than we are. Or maybe they just got lucky. I’m not discounting talent but what we call “luck” may be better defined as playing the odds. Odds can be defined as “the ratio of probability that one thing is so or will happen rather than another.” The trouble with playing the odds is that it isn’t an exact science. If it were, we would all go to Vegas and break the casinos. There are too many unknowns and too many variables to pick a winner every time.

To be successful we must eliminate the unknowns. That requires us to venture into the unknown and try something we don’t know will work. Then repeat that process trying a new method, eliminating more unknowns with each new approach. Of course, this is at “odds” with our human nature. We want instant success. That’s why the ratio of those who succeed is so small to those who don’t. Those who are successful just keep eliminating ways that won’t work until they start “catching fish.”

It reminds me of a church marquee I saw that featured this gem of wisdom, “God provides the seed, but He doesn’t throw it into the nest.” We have to venture out of the nest and find the seed. And if at first we don’t succeed? Try something else.