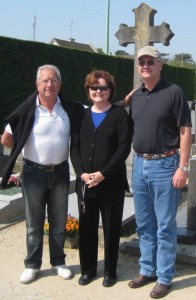 As this was our first trip to France we suffered from a perpetual state of directional disability. And that is how we met Michel. We wandered through the gate of a small cemetery not a stone’s throw from Omaha Beach in Normandy.  Michel did not speak much English but fortunately, Suedy, a friend of ours from the U.S. spoke a little French. So, with much hand signaling, exaggerated facial expressions and a few exchanges of French and English we were able to communicate. It turned out to be a most fascinating conversation.

Michel explained to us that he was eight years old when the D-Day invasion hit the shores of his village on June 6, 1944. Now, let me put this in perspective for you. In 1940, the Germans invaded France and occupied much of the northern half including Normandy, where Michel lived. He would have been four years old. So, for half of young Michel’s life all he had known was the tyranny of Nazi occupation and the Nazis were harsh taskmasters. France had to pay for the costs of the over 300,000 occupational Nazi forces. The French suffered greatly. The Nazis took what they wanted and the crumbs that fell from their tables are what the French survived on.

Oppression, shortages, hunger and malnutrition, especially among children, were a way of life in the Normandy countryside when the Allies launched an all-out invasion on the beaches of Normandy in what would prove to be the turning point in Europe during World War II. This would be the second experience with a foreign army in young Michel’s life. This one would prove to be very different — liberators instead of oppressors. He animatedly described in broken English and through gestures how American soldiers gave him chewing gum and candy.

I thought about the American soldiers Michel described. Imagine, they were the survivors of a blood bath on beaches not far from where we stood. Over 9,000 of their brothers-in-arms are buried in the nearby Normandy American Cemetery. And yet, somehow in the midst of this hell on earth, their battle-hardened hearts were still soft enough to show compassion for Michel and other children like him. These liberators who had sacrificed so much were willing to give away what little comforts they had to a child who had absolutely nothing to offer in return. It brings to mind these words by Colin Powell: “And when all those conflicts were over, what did we do? Did we stay and conquer? Did we say, ‘Okay, we defeated Germany. Now Germany belongs to us? We defeated Japan, so Japan belongs to us?’ No. What did we do? We built them up. We gave them democratic systems which they have embraced totally to their soul. And did we ask for any land? No, the only land we ever asked for was enough land to bury our dead. And that is the kind of nation we are.”

Before we parted ways with Michel, he asked permission to kiss my wife, Sondra and Suedy. Suedy said it was her first French kiss. No, not the kind you’re thinking about. It was the Charles De Gaulle variety — you know — the peck on each cheek. Then he shook hands with Gary (Suedy’s husband) and me. Michel gave us his address and asked that we write. We spent ten days in France and contrary to what we had heard about how the French dislike Americans, we met people like Michel who treated us wonderfully. Before you swallow the line about how all the French hate Americans, I’ll send you Michel’s address and you can write and ask him what he thinks. He’ll tell you about Americans who fought and died to liberate France and gave him chewing gum and candy — and asked for nothing in return. Nothing except enough land to bury our dead — and that is the kind of nation we are.

Editor’s Note: This was originally published May 28, 2008. I share it again as a Memorial Day tribute to all of our veterans both deceased and living and to those who serve in our military today. We owe you a debt that can never be repaid.

Email comments to editor@172.16.1.103. You may reprint this article in your own print or electronic newsletter, but please include the following: “Reprinted from the Purpose Unlimited E-Letter: For a free subscription, go to www.PurposeUnlimited.com. Copyright © 2015 Jim Whitt Purpose Unlimited.”