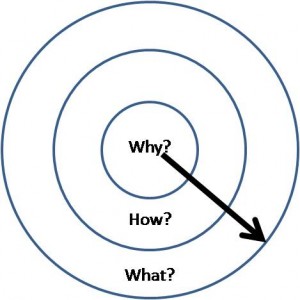 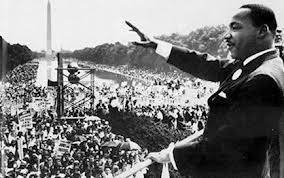 I was on my way home from a speaking engagement when thunderstorms backed up all the flights at DFW. I was one of thousands of passengers lined up at terminal restaurants to get something to eat and struck up a conversation with the guy ahead of me in line. We both agreed to share a table to expedite our dining experience.

That’s how I met Chris Pienaar who is a managing director with Bayer CropScience. During our brief visit I learned Chris shares the same purpose-based approach to business that I do and we had a very stimulating conversation on the subject. A few weeks after our seemingly serendipitous meeting he sent me an email with a link to a video featuring Simon Sinek, the author of Start with Why: How Great Leaders Inspire Everyone to Take Action.

In the video, Sinek talks about the Golden Circle, a model he says codifies the three distinct and interdependent elements — what, how and why — that make any person or organization function at its highest ability. He says most people and organizations think outside-in, starting with what and how but rarely understanding why.

On the other hand, he says inspired people, leaders and organizations think inside-out — they start with the why, then the how then the what. And he points out the why is not profit. The why is your cause, your purpose, as in why your organization exists. Profit is a result.

Everything Sinek talked about in the video is perfectly congruent with the same purpose-based approach I use with clients and have written about in Riding for the Brand and The Transformational Power of Purpose. When people understand the why, the who and what, as well as the when, where and how make sense and get a lot easier. The why is the purpose. It provides the inspiration and motivation. Without a purpose our only motivation is reward and punishment.

For example, he talked about when Martin Luther King delivered his famous speech in the summer of 1963 at the mall in Washington, D.C. Sinek made the point that King simply told people what he believed. And people who believed what he believed took on the cause as their own and told other people. A quarter of a million people didn’t show up for him, they showed up for themselves because they believed in what he believed.

That belief is simple but powerful. There are laws made by man and laws made by a Higher Authority. And there cannot be a just world until the laws of man are in line with laws of the Higher Authority. “And by the way,” Sinek concluded, “he gave the I Have a Dream speech not the I Have a Plan speech.” Plans are about who, what, when, where and how. Martin Luther King talked about why.

When I discovered my purpose in life — to help people reach their full potential — I discovered the power of why.  I was 35 years, 6 months and 16 days old. Since then, the who, what, when, where and how all happens in ways I’d never expect. Like the day I met Chris Pienaar at DFW because our flights were delayed. As a result, I made a new friend who believes what I believe. And because of that shared belief he sent me a link to video that provided the inspiration for this article which I am sharing with you. Inspiration is the result of thinking inside-out.

It all starts with why.