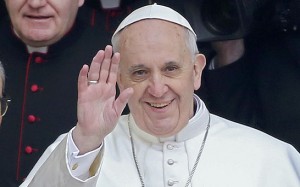 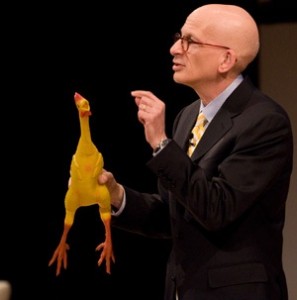 I’m not Catholic but I “liked” the pope on Facebook after reading an article entitled Pope Francis urges Catholics to shake up dioceses. “Francis was elected pope on a mandate to reform the church,” according to the article, “and in four short months he has started doing just that: He has broken long-held Vatican rules on everything from where he lays his head at night to how saints are made.

Here’s a little of what he had to say in Rio de Janeiro on World Youth Day: “I want a mess. We knew that in Rio there would be great disorder, but I want trouble in the dioceses. I want to see the church get closer to the people. I want to get rid of clericalism, the mundane, this closing ourselves off within ourselves, in our parishes, schools or structures. Because these need to get out!”

Pope Francis is a man after my own heart — he is a professional provoker!

“In order to lead you must challenge the status quo of the religion you’re living under,” writes Seth Godin in his book, Tribes. Godin isn’t using the term religion in the traditional religious sense. Religion can be used to describe a set of beliefs of any group or organization. Those beliefs are what define an organization’s culture.

When you start challenging the status quo of an organization’s “religion” — and this is especially appropriate in the pope’s case — all hell breaks loose. Here are some quotes from Tribes that can serve as a guide for change in any organization:

• The organizations that need innovation the most are the ones that do the most to stop it from happening.

• If you insist on playing today’s games by yesterday’s rules, you’re stuck. Stuck with a stupid strategy. Because the world changed.

• I think we have an obligation to change the rules, to raise the bar

• In every organization everyone rises to the level at which they become paralyzed with fear.

• Faith is critical to all innovation. Without faith, it’s suicidal to be a leader, to act like a heretic.

• The art of leadership is understanding what you can’t compromise on.

• The only thing holding you back from being the kind of person who changes things is this: lack of faith.

• When you fall in love with the system, you lose the ability to grow.

• If religion comprises the rules you follow, faith is demonstrated by the actions you take.

• Initiating is really and truly difficult, and that’s what leaders do.

• The secret of leadership is simple: Do what you believe in. Paint a picture of the future. Go there. People will follow.

• If your goal is to make change, it’s foolish to try to change the world view of the majority if the majority is focused on maintaining the status quo. The opportunity is to carve out a new tribe, to find the rabble-rousers and change lovers who are seeking new leadership and run with them instead.

• Managers are pessimists because they’ve seen it before and they believe they’ve already done it as well as it can be done.

• Given that leaders can appear anywhere in the organization, it seems to me the job of senior management is to find them and support them.

• The secret, (Ronald) Reagan’s secret, is to listen, to value what you hear, and then to make a decision even if it contradicts the very people you are listening to.

• Remarkable visions and genuine insight are always met with resistance. And when you start to make progress your efforts are met with even more resistance. Products, services, career paths — whatever it is, the forces for mediocrity will align to stop you, forgiving no errors and never backing down until it’s over.

• Part of leadership is the ability to stick with the dream for a long time. Long enough that the critics realize that you’re going to get there one way or another…so they follow.

Pope Francis and change leaders in any organization have their work cut out for them. Real change is a spiritual process because it requires a change of heart. What makes change difficult is the hearts of those who resist change are hardened. Provoking them is not for the faint of heart. But as Seth Godin says, “Initiating is really and truly difficult, and that’s what leaders do.”