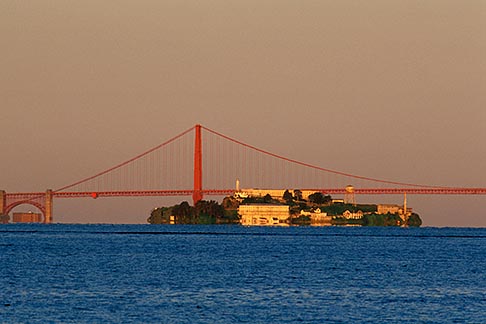 I was in a restaurant on Fisherman’s Wharf overlooking San Francisco Bay. A radiant sunset framed a silhouette of the Golden Gate Bridge to my left and to my right I could see Alcatraz, the former island prison which once housed such infamous criminals as Al Capone and Machine Gun Kelly. How ironic. Here were two famous landmarks that symbolized both freedom and captivity. The Golden Gate Strait through which so many freedom-seeking immigrants had passed, leads into the Bay which surrounds the island of Alcatraz. An island of captivity in an ocean full of freedom

Earlier that day I had conducted a seminar and had an interesting conversation with one of the participants. Dan, a postmaster in the Napa Valley, shared a story with me about Ron, a former employee. Ron was a competent letter carrier, Dan explained, but he was also a royal pain in the gluteus maximus. He made life miserable for Dan, his coworkers and everyone else he came in contact with.

One day Dan invited Ron into his office and asked him if he liked his job. Ron said he hated his job. Obviously, it wasn’t a good fit. Dan asked Ron how long he’d worked for the Post Office. “Fifteen years.” Dan asked him how much longer he planned on working for the Post Office. “Fifteen years.” This would give Ron his 30 years and he could retire

Dan then asked Ron a question that really made him sit up and pay attention, “Do you really want to be as miserable as you are now for the next fifteen years of your life?” Ron said he didn’t have a choice — he had bills to pay. “Ron,” Dan said, “we all have a choice.” He then gave Ron ten days of paid leave to think about what he’d do if he weren’t a letter carrier. He could check out other careers or just go fishing if he liked.

Ron came back to work and nothing was ever said about what he did during those ten days. Several weeks later he walked into Dan’s office and handed him his letter of resignation. Dan nearly fell out of his chair. The employees had a big send-off party for Ron. They made a banner that read: “Ron, glad to see you go!”

About a year later Dan ran into Ron on the street. He said Ron had a big smile on his face and they had a good visit. Ron was now selling real estate and was not only successful but happy.

Ron had been living in a self-imposed Alcatraz for 15 years of his life. In a sense, Dan pardoned Ron from his prison. Ron could have pardoned himself long ago but he thought he had no choice. He had merely accepted the reality of the world with which he was presented.

Like Ron, many of us live on an island of captivity surrounded by an ocean of freedom. It may not be a prison constructed of concrete and steel, but as Richard Lovelace so eloquently put, “Stone walls do not a prison make, nor iron bars a cage.”

Maybe you’re living in a prison of your own making. The question is, “Are you ready to pardon yourself?”

The Transformational Power of Purpose will help you find your purpose in life and set you on the path of its fulfillment.